It’s Saturday morning, the church is free, the organ is free, and most importantly you have a spare half an hour whilst Mrs stmarysorganist takes the children into town. Just enough time to get to grips with that bit you always mess up in the G minor Fugue. (You know the bit where all fingers, thumbs, toes, ankles, legs and arms are spinning in opposite directions?) Your whole body is relying on your gluteus maximus doing a job it wasn’t designed for. 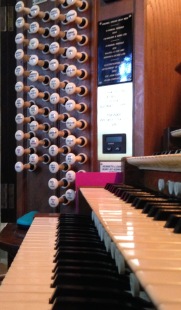 The church is however open to the public – but what could possibly go wrong?

“Yes – are you visiting?” (said in a ‘charming-organist-of-church-not-wanting-to-offend-anyone’ kind of way).

“Yes – we’ve never been to this church before. You know, it’s so nice to come into a church and hear the organ being played. I’m Ernest Lee-Blathering and this is my wife, Constance. That piece sounds difficult – having some trouble are you?”

“..Ah well, we’ve got a FANTASTIC organist at our church..”

“Oh really, and where’s that?” (feigning interest and keeping calm) 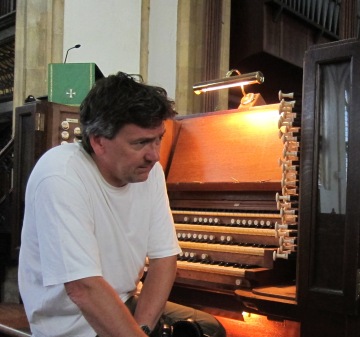 “St Bunion’s in Whiplash. We’ve got a 1850 Father Willis, untouched – 3 manual. The organist is a very young man, Peter Overly-Brill. Have you heard of him?… No?.. … Well,… now HE’s very talented. Do you know, he got his FRCO when he was just 12? Blindfolded, won all the prizes. He can play that “Staccato” piece by Vee Door from memory, with his eyes shut…. He practices all the time…. night and day….”

“Gosh – how lucky for you, and him. It is difficult finding the time to practice, This is my monthly half-hour slot. So, it’s been really interesting talking to you, and I’d love to carry on listening to you, but I really must…”

“This is a very big church – do you get many in your congregation?”

“Yes, actually we do. We have several services each Sunday and also during the week. There is an 8.30 early morning 1662 prayer-book service, and a 9.30 which is a family service, more suited to people with young children. We also have a more traditional service at 11 where our boys’ and mens’ choir…”

“…you see, at St Bunion’s they are queueing outside the church for half an hour before the services, just to hear Peter play. Do they do that here?”

” err..not every week, no. But it’s been lovely listening to you, you’ll have to excuse me – I have to do my practice. Please do come again” 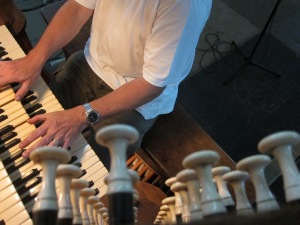 “Are you alright?  Can I get you a drink of water, or a chair, perhaps?”

” .. (pant)..I’ve walked….from the …station….to see this church….(gasp). I haven’t been here… since I was a girl, and my grandmother got married here, and she had ‘the Old rugged cross’ at her wedding. It is my dying wish to hear it played one… last… time…. at the place….she got married.”

Now, which other musical instrument can grant you the public scrutiny of your technical failings coupled with a discussion of your inadequacies, as the organ?! There you are, at peak concentration trying to master the intricacies of the ‘King of Instruments’ and also holding a conversation with a visitor, during which if you even hint at irritation, you know that a complaining email will be zinging its’ way to your Vicar before you have even had time to switch the blower off!

I remember one practice session, when I was blissfully hacking my way through Widor’s 6th, I casually looked in my mirror to see a couple of hunded oriental students who had noiselessly visited St M’s – most or whom were recording my ‘performance’ on their iPhones. So, somewhere on YouTube I’m sure there will be a hilarious video of an organist turning around and jumping three feet in the air with a startled yelp! Yes – that’s me!

At other times, my frenetic fumblings ( ie ‘practice’), have been accompanied by vacuum cleaners, several wedding rehearsals, a visit by the fire brigade, many talkative visitors and on a couple of occasions – some rather famous cathedral organists on holiday!

So – those organists who are up in the stratosphere, in a loft – I envy you! Spare a thought for those of us on ground level, It may be a hefty and dizzying climb to your eyrie, but at least you have a fighting chance of getting the G minor nailed!

Read more tales from St Mary’s Organist in the eBook 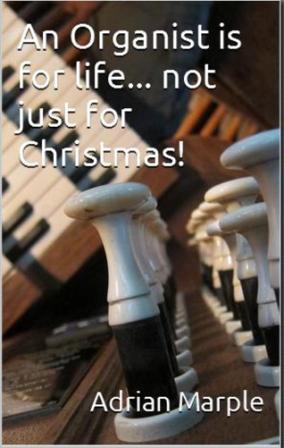 5 thoughts on “Why organists prefer lofts…”